Since last summer I, Thomas Sowell, Glenn Beck, Steve Deace, Erick Erickson, Jim Geraghty, National Review, Conservative Review, The Right Scoop, Judson Phillips, Ben Sasse, Ben Shapiro, William Kristol, The Weekly Standard, Tea Party Nation, David Boaz…(for more see HERE.) …WE have warned about how vile and reprobate DT is. WE were on the roof-tops proclaiming that DT was and IS an unmitigated fraud, liar, cheat and pervert. WE tried to tell all you Liberals, R.I.N.O.s and Trump-Bots the FACTS AND TRUTH about DT.

YOU mocked us, scorned us, said we were in “Hitlary’s pocket”!

YOU called US Liberals, whiners, cry-babies, many of YOU cursed us and bullied us…YET WE KEPT WARNING.

BECAUSE WE LOVE GOD, AMERICA, AND YOU, YES, YOU, TOO MUCH TO SHUT UP.

Now, here it is, less than one month from the MOST CRITICAL ELECTION SINCE 1860 and- FINALLY- YOU are hearing and seeing WHAT WE warned you about for 15-16 months.

It’s too late now…was too late since Indiana…we just didn’t know it then:
AMERICA IS DEAD.

BUT, just in case WE/America REPENTS and God Divinely and directly intervenes and spares us one more time let me post another warning…

If you think using Trump’s 1999 interview where he admits his liberalism is unfair because it’s too long ago, how about when Trump joined Bernie Sanders in advocating for a taxpayer-funded, single-payer healthcare system in 2015?

If you think using Trump’s 1999 interview in which he admits his liberalism is unfair because it’s too long ago, how about when the baby-killers at Planned Parenthood named Trump their “favorite Republican” in 2015?

If you think using Trump’s 1999 interview where he admits his liberalism is unfair because it’s too long ago, how about when Trump failed to support religious liberty in 2015?

If you think using Trump’s 1999 interview where he admits his liberalism is unfair because it’s too long ago, how about when Trump said he wouldn’t tear up Obama’s Faustian Bargain with Iran back in 2015?

If you think using Trump’s 1999 interview where he admits his liberalism is unfair because it’s too long ago, how about when Trump sounded like an anti-Israel liberal (claiming Israel may not want peace and will have to give up even more to Islamists) in 2015?

If you think using Trump’s 1999 interview where he admits his liberalism is unfair because it’s too long ago, how about when Trump came out for a 45% tariff on imported Chinese goods in 2015 (and then lied about it in last week’s GOP debate)?

By the way, polls show middle and lower-middle class Americans are most likely to support Trump. They would be the ones most devastated by Trump’s tariff scheme, because the higher cost of goods they buy at big box stores like Wal-Mart and Target would be passed on to them.

If you think using Trump’s 1999 interview where he admits his liberalism is unfair because it’s too long ago, how about when Trump donated $50,000 to Obamaista Rahm “never let a good crisis go to waste” Emanuel in 2010?

If you think using Trump’s 1999 interview where he admits his liberalism is unfair because it’s too long ago, how about when despite all his tough immigration talk, Trump came out for amnesty in 2015?

If you think using Trump’s 1999 interview where he admits his liberalism is unfair because it’s too long ago, how about when Trump used his pro-baby killing sister as an example of the type of Supreme Court justices he’d appoint in 2015?

Here’s the bottom line—there’s not a single issue on which Trump is a credible conservative.

So why are some conservatives still defending this typical New York City liberal?

This one is from this last week:

Trump campaign is canceling hundreds of thousands of dollars in advertising in Fla, NC, OH, possibly other states, per two buying sources.

What Does It Profit You to Gain the White House and Lose Your Soul?

Scripture says that if a person calls himself a Christian is guilty of sexual immorality, drunkenness, greed, or swindling others, other Christians should have nothing to do with that person until they repent. The reason is two fold. First, shunning the person will remind them of the need to repent and draw them back if they are truly Christian.Second, continuing to associate with such a person harms the witness and effectiveness of the church. How can the church be clear on moral teachings if it props up someone who revels in sin without repenting?

Scripture also says that “bad company ruins good morals.” We are seeing Christians try to justify the sins of one by reminding people about the sins of another.

This should be a bridge too far.

What does it profit a man to win the White House or Supreme Court and lose his soul?

What does it profit you to defend Trump by tearing down others or reminding others of the Clintons’ sins. At some point, and I think that point is past, Christians lose credibility on a message of repentance when they defend the antics and behaviors of Trump. Bad company ruin good morals and we are seeing that on full display within the party that once said character counts and now believes it only counts if the other side is in charge.

Stop telling me Trump is better than Clinton. He is not. What you have is a man who brags that because he is rich and famous he can grab women by their “p—y” and tried to have a married woman fired from her job because she would not have sex with him. That is Bill Clinton territory. That is abuse of power without even being President of the United States.

If Donald Trump has that behavior, while married, and he is not even President, do you really think he will be better in the White House?…

And, lastly, here are over 30 stalwart CONSERVATIVES warning back in FEBRUARY to NOT support DT:

But the truth is, the Tea Party did not arise because Barack Obama defeated his opposition. It arose because there was no opposition. Over the years, there have been endless fractures in the façade of individual freedom, but three policies provided the fuel that lit the tea-party fire: the stimulus, the auto bailouts, and the bank bailouts. Barack Obama supported all three. So did Donald Trump. While conservatives fought against the stimulus, Donald Trump said it was “what we need,” praising Obama’s schemes of “building infrastructure, building great projects, putting people to work in that sense.” While conservatives fought against the auto bailouts, Donald Trump claimed “the government should stand behind [the auto companies] 100 percent” because “they make wonderful products.” While conservatives fought against the bank bailouts, Donald Trump called them “something that has to get done.” Let his reasoning sink in for a second: The government “can take over companies, and, frankly, take big chunks of companies.” When conservatives desperately needed allies in the fight against big government, Donald Trump didn’t stand on the sidelines. He consistently advocated that your money be spent, that your government grow, and that your Constitution be ignored. Sure, Trump’s potential primary victory would provide Hillary Clinton with the easiest imaginable path to the White House. But it’s far worse than that. If Donald Trump wins the Republican nomination, there will once again be no opposition to an ever-expanding government. This is a crisis for conservatism. And, once again, this crisis will not go to waste. — Glenn Beck is a nationally syndicated radio host, the founder of TheBlaze, and a best-selling author.

Trump’s greatest offenses against American tradition and our founding principles are his nativism and his promise of one-man rule. Not since George Wallace has there been a presidential candidate who made racial and religious scapegoating so central to his campaign. Trump launched his campaign talking about Mexican rapists and has gone on to rant about mass deportation, bans on Muslim immigration, shutting down mosques, and building a wall around America. America is an exceptional nation in large part because we’ve aspired to rise above such prejudices and guarantee life, liberty, and the pursuit of happiness to everyone. Equally troubling is his idea of the presidency — his promise that he’s the guy, the man on a white horse, who can ride into Washington, fire the stupid people, hire the best people, and fix everything. He doesn’t talk about policy or working with Congress. He’s effectively vowing to be an American Mussolini, concentrating power in the Trump White House and governing by fiat. It’s a vision to make the last 16 years of executive abuse of power seem modest…

— David Boaz is the executive vice president of the Cato Institute and the author of The Libertarian Mind. 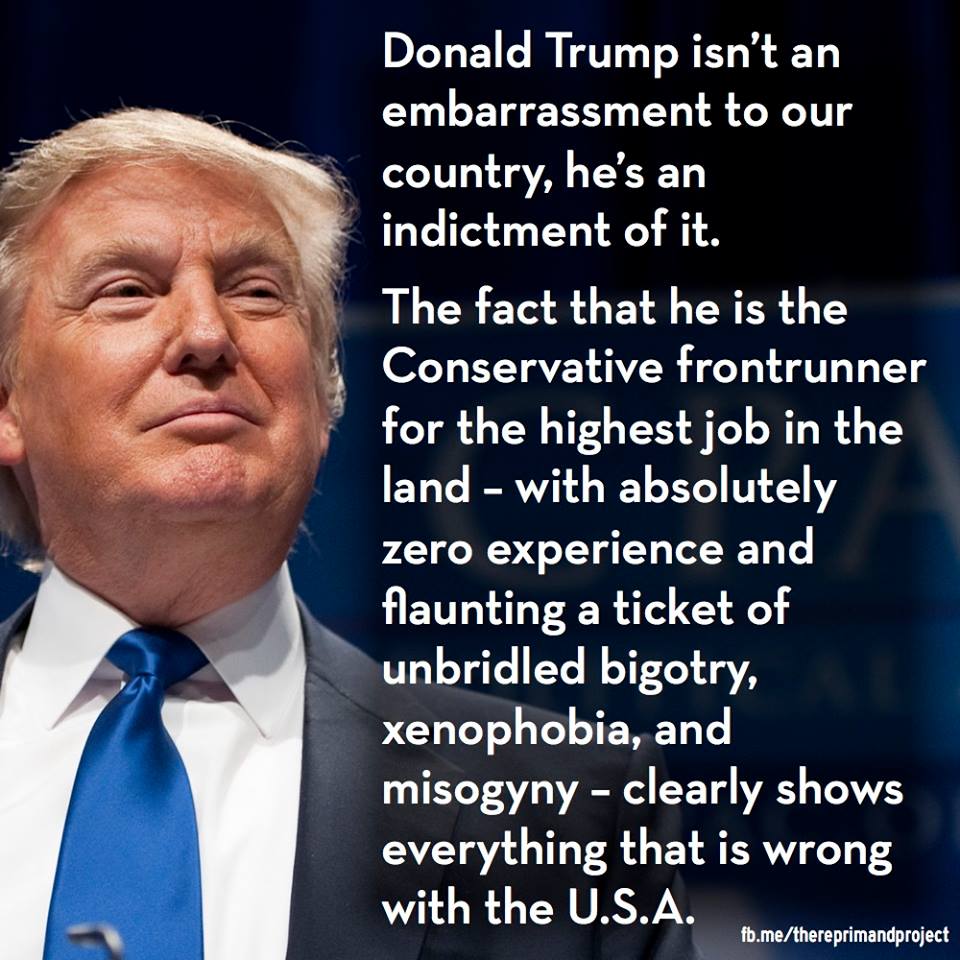 THOMAS SOWELL In a country with more than 300 million people, it is remarkable how obsessed the media have become with just one — Donald Trump. What is even more remarkable is that, after seven years of repeated disasters, both domestically and internationally, under a glib egomaniac in the White House, so many potential voters are turning to another glib egomaniac to be his successor. No doubt much of the stampede of Republican voters toward Mr. Trump is based on their disgust with the Republican establishment. It is easy to understand why there would be pent-up resentments among Republican voters. But are elections held for the purpose of venting emotions? No national leader ever aroused more fervent emotions than Adolf Hitler did in the 1930s. Watch some old newsreels of German crowds delirious with joy at the sight of him. The only things at all comparable in more recent times were the ecstatic crowds that greeted Barack Obama when he burst upon the political scene in 2008. Elections, however, have far more lasting and far more serious — or even grim — consequences than emotional venting. The actual track record of crowd pleasers, whether Juan Perón in Argentina, Obama in America, or Hitler in Germany, is very sobering, if not painfully depressing. After the disastrous nuclear deal with Iran, we are entering an era when people alive at this moment may live to see a day when American cities are left in radioactive ruins. We need all the wisdom, courage, and dedication in the next president — and his or her successors — to save ourselves and our children from such a catastrophe. A shoot-from-the-hip, belligerent show-off is the last thing we need or can afford. — Thomas Sowell is a senior fellow at the Hoover Institution, Stanford University. We tried to warn you.

WE KNEW BEFORE the “grab a woman by her P*ssy” tape came out.

WE KNEW ALL ALONG that DT was and IS a lying, Liberal Fraud, and a corrupt, egotistical Hard-Left, New York Liberal.

WE KNEW- AND WE WARNED.

YOU IGNORED- NOW OWN IT.

AS FOR ME… I’m voting for the ONLY REAL Conservative still in the race Evan McMullin…the only thing a REAL CONSERVATIVE can do. Oh…and pray…a LOT…