Many, Many Conservatives Have LONG Said El Trampo Is NOT By Any Stretch Of The Imagination Constitutional, Conservative, Nor Christian…Now The Venerable Wall Street Journal Is Chiming In SAYING-

WSJ to Trump: Straighten Up or Quit the Race

Donald Trump faces an uphill battle for the presidency, and unless he can turn around his campaign or hand it off to another Republican, The Wall Street Journal’s editorial says it will be Hillary Clinton in the White House next year.

The GOP nominee has steadily lost ground to Clinton since the Democratic National Convention, after a brief stint on top after the Republican National Convention. In an editorial Monday, the Journal recounts how Trump’s advisers would “like him to be disciplined. They want him to focus on growing the economy and raising incomes and fighting terrorism.”

Donald Trump lashed out at the media on Sunday after more stories describing dysfunction inside his presidential campaign. “If the disgusting and corrupt media covered me honestly and didn’t put false meaning into the words I say, I would be beating Hillary by 20%,” Mr. Trump averred on Twitter.
Mr. Trump is right that most of the media want him to lose, but then that was also true of George W. Bush, George H.W. Bush and Ronald Reagan. It’s true of every Republican presidential nominee. The difference is that Mr. Trump has made it so easy for the media and his opponents.

The latest stories comport with what we also hear from sources close to the Trump campaign. Mr. Trump’s advisers and his family want the candidate to deliver a consistent message making the case for change. They’d like him to be disciplined. They want him to focus on growing the economy and raising incomes and fighting terrorism.
They think he should make the election a referendum on Hillary Clinton, not on himself. And they’d like him to spend a little time each day—a half hour even—studying the issues he’ll need to understand if he becomes President.

Is that so hard? Apparently so. Mr. Trump prefers to watch the cable shows rather than read a briefing paper. He thinks the same shoot-from-the-lip style that won over a plurality of GOP primary voters can persuade other Republicans and independents who worry if he has the temperament to be Commander in Chief.
He also thinks the crowds at his campaign rallies are a substitute for the lack of a field organization and digital turnout strategy. And he thinks that Twitter and social media can make up for being outspent $100 million to zero in battleground states.

By now it should be obvious that none of this is working. It’s obvious to many of his advisers, who are the sources for the news stories about dysfunction. They may be covering for themselves, but this is what happens in failing campaigns. The difference is that the recriminations typically start in October, not mid-August.

These stories are appearing now because the polls show that Mr. Trump is on the path to losing a winnable race. He is now losing in every key battleground state, some like New Hampshire by double digits. The Midwest industrial states he claimed he would put into play—Wisconsin, Pennsylvania—have turned sharply toward Mrs. Clinton.

I remember Bob Dole whining about the media coverage back when he ran in 1994. He decried “where’s the media outrage against all the Clinton scandals and policies”?

Now El Trampo is doing the same whiny complaining, only with more venom…and doing it in August- not October.

Meaning: He and/or his staff KNOW they are and WILL LOSE BIG. And with honest observation and scrutiny of the REAL Little Lying, Liberal Donnie El Trampo going back to the 1970’s an HONEST student of recent history would note that Trampo is a liar for the sake of lying, and is as vile and corrupt as they come…including ObaMarxist and The Clinton Crime Family.

But, again, we REAL Conservatives started warning about THIS last July!! Over a year of warning and trying to educate on the REAL Trampo… you Trump-Bots have refused to listen thus far, and I see little evidence that you will, or even can, take an honest look at the facts. 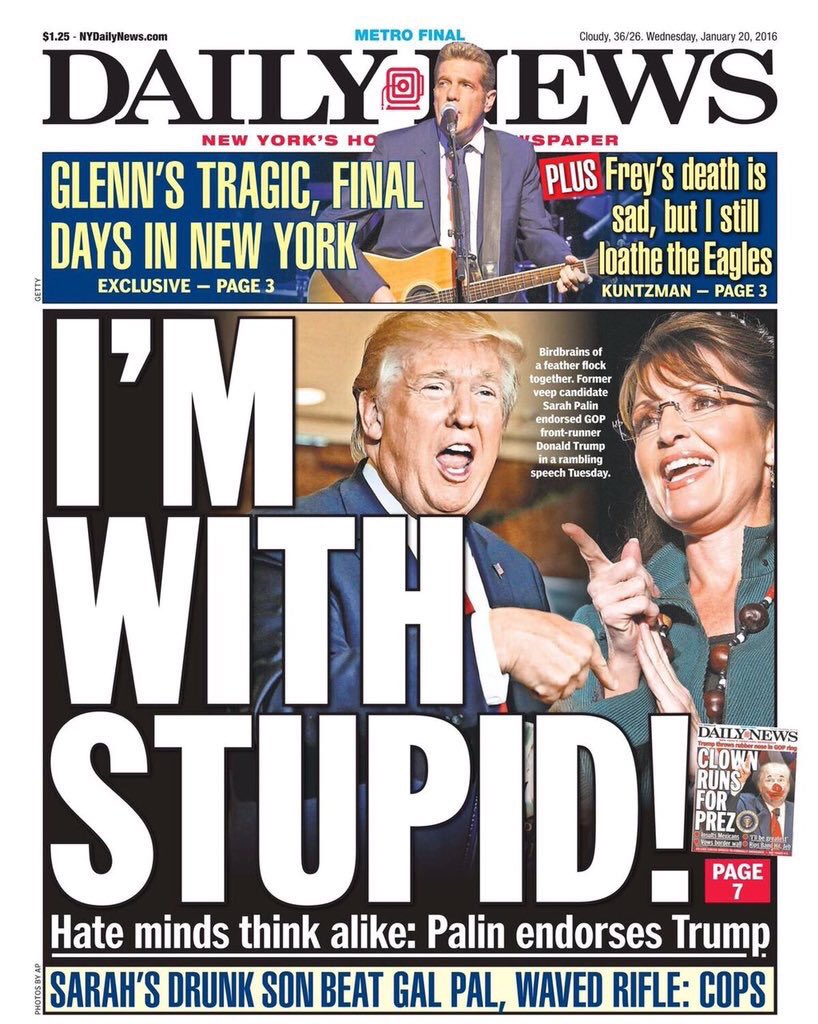 Mountains of sources have all chimed in to try and educate and warn you Trump-Bots, aka R.I.N.O.s and Liberals, but you were either deluded and actually believed the Liberal crap spewing forth from Trampo’s bowels…OR you are complicit yourself in foisting a New York Liberal and Liar on us as a BOGUS G.O.P. nominee. Evidence points to BOTH groups of Trump-Bots existing- the deluded and the deliberate.

THIS FESTERING PILE OF LIBERALISM, AKA El Trampo, ALSO did and DOES THIS:
VOTED FOR JIMMY CARTER- TWICE

AND IS ENDORSED BY THE KKK AND STORMNFRONT!!!
ALL OF THE ABOVE IS ABSOLUTELY TRUE…

I ISSUE THE CHALLENGE TO EVERY TRUMP-BOT TO SHOW ME HOW:

1) any of that IS Conservative,

2) how YOU can be truly Conservative and support THAT. In all of his books, interviews and articles Trampo has admitted to lying, fraud, and to saying what people want to hear so he can sell them what he’s currently pushing…HOW can any REAL Conservative support an avowed LIAR, FRAUD AND CHEAT?!! 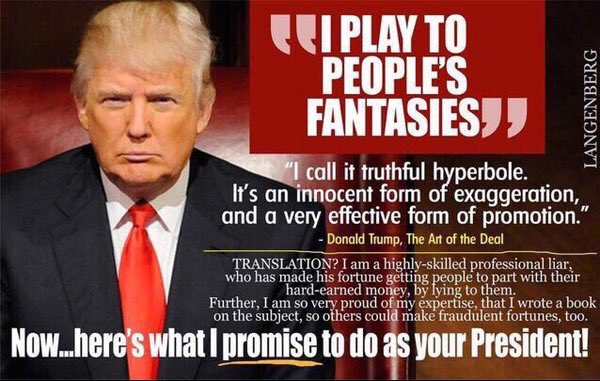 America is not headed for the cliff…

We have ALREADY LONG AGO fallen off the cliff and are waiting either for Christian, Constitutional, Conservative “CPR’ …or for the next Liberal to shovel dirt on us…THIS, in my observation, will be our LAST election if we don’t earnestly, honestly and humbly seek GOD and do and vote as HE would want us…if America continues to follow the path of Liberalism via either Hitlary or El Trampo then America will arrive at the end of the Primrose Path of Destruction. Leviticus chpt. 26; Deuteronomy chpt. 28…read and learn.