Well, apparently it is only the “fake news” that strives for the TRUTH on and about DT and his associates, administration picks and past. “Real News” bends over, grabs their ankles and kisses their own butts to cover for, lie for, and generally muddy-the-waters for Little, Lying, Liberal Donnie El Trampo.

I’ve had countless mind-numbed Trump-Bots, aka Liberal Trolls, tell me that:

In an article I wrote for Tea Party Nation I used THESE SOURCES in that ONE article:

Trump-Bots/Liberal Trolls (same thing) all began to slobber and blather about each and everyone of those sources was “fake news”!

ONLY Breitbart, aka Trumpbart, and it’s Alt-Right ilk are “real news”…yeah…right..

WELL, THE SWAMP GLOVES ARE OFF AND THROWN DOWN…HARD.

IF YOU THOUGHT I WAS HARD ON YOUR MARXIST MOON-BAT, AKA DT, BEFORE, WELL, YOU AINT SEEN NOTHING YET!

Where Is The Outrage? Trumpers Silent As He Fills His Administration With ‘Globalists’

A lot of people remember the confrontation Senator Ted Cruz had a with a Trump supporter during the campaign. At one point Cletus asks Cruz, “Where’s your Goldman Sachs jacket? We know your wife works there!”

It was a shot taken not only at Cruz but also one at Hillary Clinton. After all, it was Trump who said Goldman Sachs had “total control” over her. The hardcore Donald Trump supporters call people such as Speaker Paul Ryan and Senator Marco Rubio, “globalist traitors” and shriek about “globalism” at every turn.

Yet, the silence is deafening now that Donald Trump is filling his cabinet and other administrative posts with these so-called “globalists.”

The best part was watching Trump fans laugh and chortle over Donald Trump not choosing the rich “globalist” Mitt Romney for Secretary of State in favor of Rex Tillerson – they very wealthy CEO of a global oil and gas company.

Trump’s choice for Commerce Secretary is Wilbur Ross. A former banker and leveraged buyout specialist, Ross is worth $2.9 billion. He is now a venture capitalist but when he was buying companies he was also doing what Trump railed about – sending jobs to Mexico and China:

Here’s how it worked: In 2004, Ross bought Cone Mills, a North Carolina textile company facing bankruptcy, as Bloomberg detailed in a 2012 write-up. He combined it with another textile company, Burlington Industries, to form International Textile Group. And it was renamed Cone Denim. Bloomberg explained that Ross expanded production “in less-expensive emerging markets” and that he also “eliminate[d] duplicative facilities.”

In other words, layoffs and outsourcing.

Presumptive Republican presidential nominee Donald Trump appeared to soften his tone on immigration Saturday, saying he wouldn’t issue mass deportations if he became president.
“President Obama has mass deported vast numbers of people — the most ever, and it’s never reported. I think people are going to find that I have not only the best policies, but I will have the biggest heart of anybody,” Trump said in an interview with Bloomberg Politics Saturday.

…”We are going to get rid of a lot of bad dudes who are here. That I can tell you,” Trump said…

Trump Considers Democrat Sen Heitkamp For Cabinet, But She May Not Accept

President-elect Donald Trump is considering nominating Democratic Sen. Heidi Heitkamp as agriculture secretary,…Heitkamp was at the top of the list to lead the Department of Agriculture, according to a source close to the Trump transition…

…Heitkamp met with Trump Dec. 2 at Trump Tower, and said she had a “thoughtful and wide-ranging” discussion with the president-elect about the Dakota Access Pipeline, the future of coal production in the U.S. and energy issues, among other things.

[NOTE: Notice that “drain-the-swamp” Conservative is filling HIS admin with DEMOCRATS, GOLDMAN-SACHS, GLOBALISTS, INSIDERS AND ELITISTS.]

The self-enriching commander in chief is bringing his children into the family business as he puts the bully in the bully pulpit.

If you’re wondering if the new normal in American politics includes a president-elect rage-tweeting at companies he dislikes, engaging in near-dailyhissy-fits over media coverage he finds insufficiently obsequious, and engaging in constant social media warfare over slights to his ego, you’d be right. Witness the emerging gangster capitalism of Donald Trump.

No one has felt much genuine shock that Donald Trump refuses to divest his control over his empire in a real, legally binding way. Only a fool would believe Trump would draw a sharp, bright line between his personal and family financial interests and the interests of the nation. Since the election, he’s demonstrated in both word and deed that he intends to fully monetize the presidency to benefit his companies, integrate his children into consequential government decisions, and put the bully in the bully pulpit.

Those things were expected as part of the skeezy, venal radiation Trump gives off when it comes to his business dealings. Like many, I still expect that Trump is going to make Americans aware of the phrase “emoluments clause” like no one else in history…

…For all that, the crony-capitalist (and bogus) Carrier deal and his new war on Boeing should make Washington’s dwindling tribe of conservatives dedicated to economic freedom take notice. This isn’t just the wrong policy direction; it’s a preview of a new, dark economic populism that many warned was coming.

Boeing is building a brand new 747 Air Force One for future presidents, but costs are out of control, more than $4 billion. Cancel order!

In the interests of not normalizing post-truthiness, I must note that Trump’s statement was a lie from top to bottom. Boeing isn’t over-budget on the new AF1 contract, Trump has no idea what he’s talking about, and arguing the point of his tweet misses his intent.

Three weeks after the election, every day is another day of the Theater of Trump, showing the contours of his extraordinary willingness to shatter Republican free-market ideals on the altar of his version of gangster capitalism. It wasn’t that Boeing went to war with Trump, or shipped jobs overseas. It’s that the bizarre, delicate ego of Donald J. Trump was offended by Muilenburg’s oblique worry about the trade war our next president seems determined to launch.

The tweet was one more piece of evidence that the next president isn’t going to even give the free market the time of day; instead, he’s embracing a state-capitalist flavor of populism where the president of the United States directly and personally intervenes in the governance of private businesses. Trump’s new reality show is “You Bet Your Market Cap!” …

…We have a speaker of the House who until Trump was an admitted devotee of Ayn Rand. We have members of the Senate and the House who have railed for not years, or decades, but for generations against crony capitalism, government intervention in markets, excessive regulation, and corporate welfare. Today, they are born-again to the cult of Trumponomics. They were often hypocritical about free markets, but now they’re not even pretending.

This is how the slippery slope looks: Trump blurts out a new attack outrage, and members of Congress with an “R” after their names either agree because he’s got one too, or tacitly allow it to slide. Many of them hope they’ll be dealing with Pence, or some other relatively sane member of his cabinet. They’re looking at Trump as a vector to pass the House agenda, as someone who they can “puppet,” in the words of one member of the House leadership. The moral rot and compromise with Trump’s statist economics are already quite far gone. …

…Some perhaps believe that he’ll be business-as-usual, a transactional politician who plays nicely in the D.C. lobbying ecosystem despite his public bluster. They’re wrong, of course. Trump and Steve Bannon, in particular, see the business class as the enemy. They see corporate CEOs as either peers or foes, and the peers fall under the Machiavellian “enemies closer” rule. Those confident they can buy, flatter, or avoid Trump are playing a game, unlike anything America’s corporate world has seen before.

They’re not reading Trump’s history. Once Trump has “won” a feud (or an election) the normal rules of politics would be to return to the status quo ante. Not Trump. He continues to attack, belittle, and torture his victims long after there’s any political utility to it. It will be the same with his thug populism and attacks on American businesses. The fight won’t be over; capitulation isn’t enough. He demands abject humiliation. (Take a look at the dead eyes of Mitt Romney during this secretary of State charade and tell me he hasn’t suffered enough.) …

…This behavior isn’t without precedent in the hands of authoritarians. In the early days of Vladimir Putin’s reign, a number of billionaire oligarchs like Mikhail Khodorkovsky and Platon Lebedev of the massive Yukos oil concern crossed the Russian strongman. Putin first turned the Russian media and propaganda machine against the men, then the power of the Russian courts, which—handily enough—he controlled. At first, this was greeted as a populist new leader draining the swamp (where have I heard that lately?) and teaching the hated oligarch class a stiff lesson.

It didn’t stop there, though. The already shaky post-Soviet commitment to reducing the terrible power of the state over the lives of its citizens was swiftly forgotten and as Putin’s attacks on his enemies were backed up by a media dedicated to his aggrandizement and protections, many bowed to the inevitable. The reporters, civic activists, and others started to die, disappear, or be imprisoned. Putin’s personal wealth grew as he destroyed his political opponents. His image as a celebrity despot was carefully cultivated and polished. A rigid core of Putin voters loves him as the man who Made Russia Great Again. Sound familiar? … 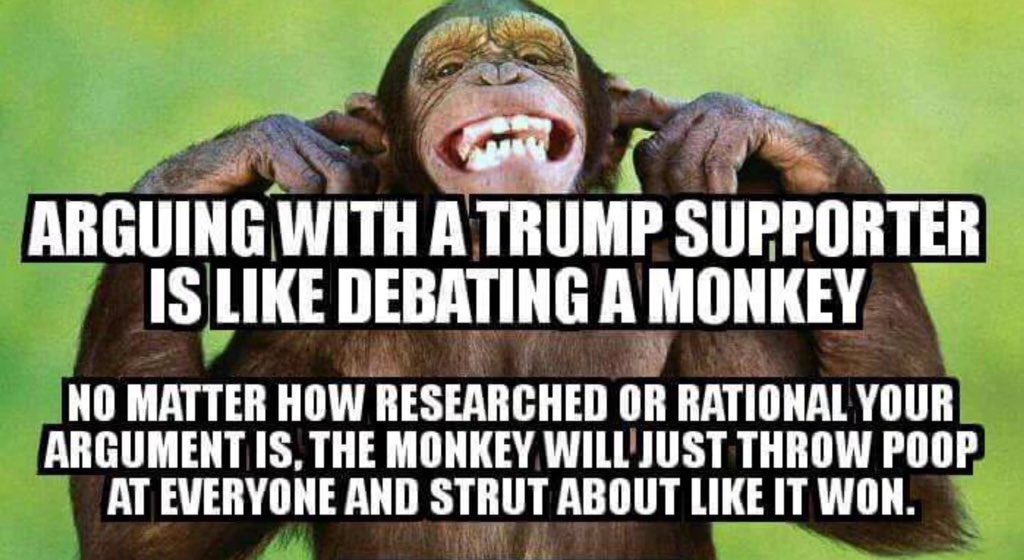 Trump Deepens Goldman Ties As He Builds Out Economic Team

In this Nov. 29, 2016 photo, Goldman Sachs COO Gary Cohn talks on his phone as he waits for the start of a meeting with President-elect Donald Trump at Trump Tower in New York. Trump is expected to pick Cohn to lead the White House National Economic Council, according to two people informed of the decision.
*SOURCE*
[EXCERPTS.]

WASHINGTON (AP) — In the heat of the presidential campaign, Donald Trump [ME: FALSELY] accused primary rival Ted Cruz of being controlled by Goldman Sachs because his wife, Heidi, previously worked for the Wall Street giant. He slammed Hillary Clinton for receiving speaking fees from the bank.

But the financial industry’s high-level presence in Trump’s burgeoning administration runs counter to some core campaign messages that energized his supporters.

And Goldman Sachs stocks are up 33 percent since Trump’s election.

THAT IS NOT “DRAINING THE SWAMP”.

THAT IS ANOTHER DT LIE.

Witness from HIS OWN MOUTH:

But there’s only one truly massive liar [that was] in this race: Donald Trump. When Politico attempted to measure how many lies Trump told over the course of 4.6 hours of speeches, they found that he lied, on average, once every five minutes. When Huffington Post catalogued his lies over the course of just one town hall event, they came up with 71 lies.

Which made it relatively easy to come up with this not-even-close-to-complete list of 101 lies from Donald Trump.

All of the 101 lies is documented straight back to Little, Lying, Liberal Donnie El Trampo. 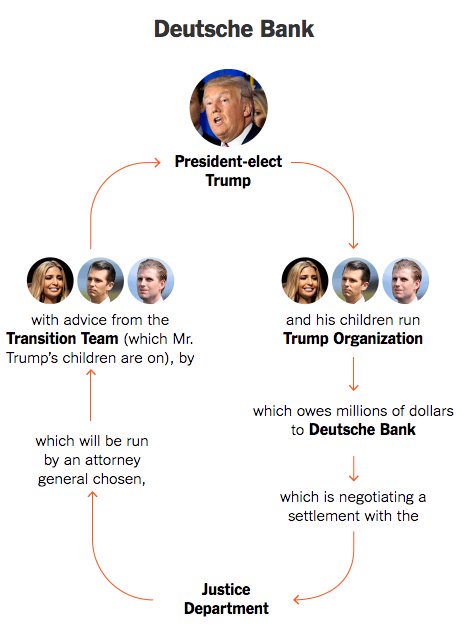 YOU TRUMP-BOTS WOULD NOT LISTEN.

Hope you enjoy eating all this crow… ***mutters “fake news” my eye!!**