[NOTE: I will NOT post the vile, profane tirades of an unrepentant, Liberal…you can go to the link in the *SOURCE* and read, watch and listen for yourself.]

I am a Constitutional-Conservative, i.e. meaning Principled Conservatism defined and restricted by America’s Founding Documents as written by America’s Founding Fathers…BUT ABOVE THAT I AM A BIBLICAL-CHRISTIAN, i.e. meaning The Bible Is my sole authority on ALL things spiritual, doctrinal, cultural, moral, philosophical and political. I can NOT and will NOT budge from these common, foundational precepts and principles, to compromise is a sin as a Christian, and treason as a Patriot.

Let me post this open letter from Rev. John Piper on How To Live Under The Reign Of DT:

How to Live Under an Unqualified President 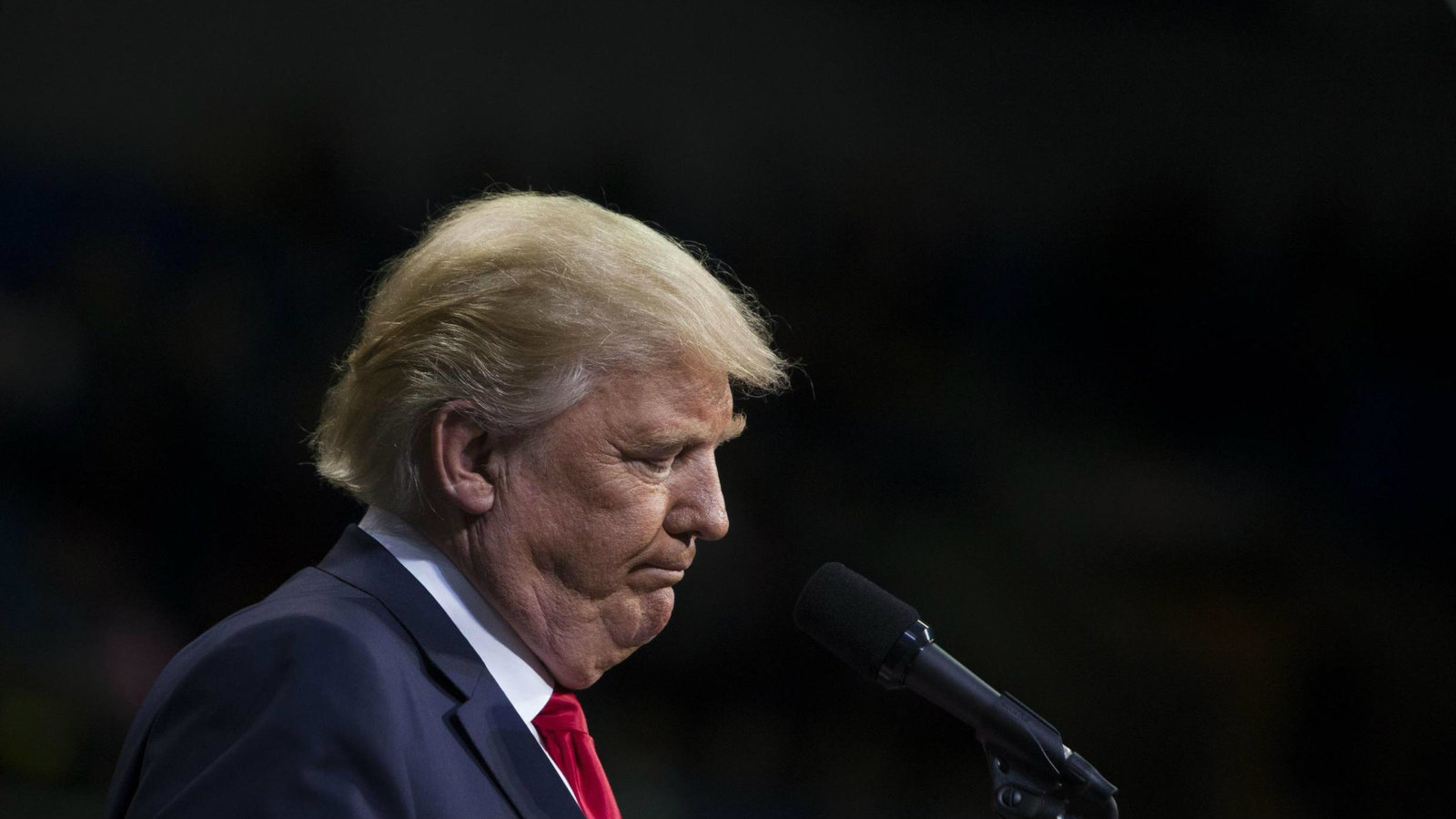 Today we will inaugurate a man to the presidency of the United States who is morally unqualified to be there. This is important to say just now because not to see it and feel it will add to the collapsing vision of leadership that enabled him to be nominated and elected.

Not only that, but if we do not see and feel the nature and weight of this sorrow, we will not know how to pray for his presidency or speak as sojourners and exiles whose pattern of life is defined in heaven, not by the mood of the culture.

Why Trump Is Unqualified

Donald Trump’s immoral behavior in the past, and his ongoing unwillingness to renounce it as evil, show that he is morally unfit to lead our nation. So was Hillary Clinton because she approves of killing unborn children.

As of last April, Andy Naselli provided some of the facts about Trump’s immoral conduct:

There is no morally good presidential candidate in this election. I previously called Donald Trump a “good candidate with flaws” and a “flawed candidate,” but I now regret that I did not more strongly condemn his moral character. I cannot commend Trump’s moral character, and I strongly urge him to withdraw from the election.

Then, in words that are almost beyond belief in a presidential candidate, the New York Times provided a transcript of Trump’s 2005 vile behaviors toward women (the shock value of which may be lost if you have not read his actual words). Note well: Trump has not, as far as I am aware, publicly renounced these behaviors as evil, but deflected the issue by talking only about the “language,” calling it “locker-room talk.” However, the main issue was not his talk. It was his immoral action asserted in the talk.

As I understand the role of leadership in high public office, these impenitent and boasted acts of immorality disqualify a person from office. Here’s why.

1. A leader should lead. That is, he should set the pace, define the path, embody the vision, and inspire emulation. He himself should be what he is calling others to be. That is what it means to lead. Donald Trump is not such an embodiment of what we want the citizens of America to be. In important ways, he is the opposite.

2. A leader should be dependable, trustworthy, reliable. To invest someone with leadership is a trust. But Donald Trump treats language — the medium of truth — as a wax nose to be bent and molded to create a desired outcome, whether it corresponds to the truth or not. But where truth is treated with such indifference or contempt, the foundations of justice are crumbling. There is no recourse for the poor, if the powerful say that truth is what they say it is.

3. A leader should be a good example for our young people in matters of character and moral uprightness and civility. Few parents would say to their young people: strive to be like Donald Trump. That is a great sadness.

4. A leader should not model the success of immoral behavior, and thus further destigmatize and normalize evils which, if spread, will bring discredit and ruin to our nation. To reward Donald Trump’s immoral behavior with the presidency does just that — it says to our children, and to the world, that these evils are not that bad, and can be embraced with no great negative consequences.

5. A leader should be known for the virtues that make a republican form of government possible. Virtually all the founding fathers agreed that without a virtuous people, the rule of law and of representative self-government will not survive. Donald Trump’s character is not what they had in mind by “virtue.” It is, in significant ways, the opposite, and therefore his example contributes to the undermining of the republic.

Because I regard these as qualifying marks of leadership in public office, I regard Donald Trump as not qualified for the presidency.

But today he will become president.

This is not surprising from a Christian point of view. The Christian faith was born, and has flourished, under regimes less qualified to lead than Donald Trump. The murderous Herod (Matthew 2:16) and the Christian-killing Nero (Tacitus, Annals XV.44) did not thwart the spread of a faith whose King and power and charter are not from this world (John 18:36). The movement that Jesus Christ unleashed in the world, when he died and rose again, does not depend on qualified human government for its existence or power.

The linking of the Christian church with the ruling political regime is not essential to the life and fruitfulness of Christian faith. On the contrary, such linking has more often proven to corrupt the essential spirit of Christ, who typically uses the weak things of the world to shame the strong (1 Corinthians 1:27), and whose life-saving weapons do not consist in media monopolies, commanding wealth, or civil laws.

Followers of Christ are not Americans first. Our first allegiance is to Jesus, and then to the God-inspired word of Scripture, the Bible. This is our charter, not the U.S. Constitution.

How Then, Under This President, Shall We Live?

2. Until God answers that prayer, recognize that God’s providence rules over the unrepentant kings of the earth (Daniel 2:37–38, 4:35; Psalms 47:9; 135:6). “The king’s heart is a stream of water in the hand of the Lord; he turns it wherever he will” (Proverbs 21:1). Therefore, God can restrain the pride and folly of secular leaders (Genesis 20:6). Just as with the Babylonian Nebuchadnezzar (Jeremiah 25:9), and the Persian Cyrus, God makes the rulers of the earth “fulfill all [his] purpose” (Isaiah 44:28).

3. Accordingly, let us go on to pray “for kings and all who are in high positions, that we may lead a peaceful and quiet life, godly and holy in every way. This is good, and it is pleasing in the sight of God our Savior, who desires all people to be saved and to come to the knowledge of the truth” (1 Timothy 2:2–4).

4. And as we pray, let us recognize that, even in unbelieving leaders who cannot do God-pleasing works of faith, there is the possibility of promoting “good” conduct, which is “good” in the sense of having the outward form of what genuine trust in Christ would do.

To be sure, “without faith it is impossible to please God” (Hebrews 11:6), and “whatever is not from faith is sin” (Romans 14:23), because when human conduct is not rooted in reliance on God, it is part of the very rebellion that ruins the world. Nevertheless, the apostle Peter teaches that even unbelieving rulers are sent by God “to punish those who do evil and to praise those who do good” (1 Peter 2:14). So, even though this “good” is not from faith, and therefore does not please God as the fruit of faith, yet it has the form of the conduct that would come from faith.

5. Therefore, even though it is not the main concern of the Christian church, and may not lead to salvation and eternal life, let us also pray and work this lesser “good,” as well as the ultimate good of faith in Jesus Christ, and the genuine love for people that glorifies our Father in heaven (1 Peter 2:12), who called us “out of darkness into his marvelous light” (1 Peter 2:9).

6. Above all, let us commend to everyone, with every sacrifice necessary, “the light of the gospel of the glory of Christ” (2 Corinthians 4:4), and, if God wills, let us gather with more and more people, from every ethnicity and every class, into healthy, holy, humble, biblically faithful churches.

Let us worship together in beautiful diversity and harmony with reverence and awe (Hebrews 12:28) the one true and living triune God. And let us love each other “earnestly from a pure heart” (1 Peter 1:22), and keep ourselves “unstained from the world” (James 1:27), so that the church becomes a beautiful alternative to “the corruption that is in the world” (2 Peter 1:4).

7. And let us work with all our might (1 Corinthians 15:10) and with overflowing joy (2 Corinthians 8:2) to take the greatest news to the peoples of the world, who have no access to the saving truth that Jesus Christ came into the world to save sinners from eternal death (1 Timothy 1:15), and give them everlasting joy with God (1 Peter 3:18; Psalm 16:11).

Let us not exhaust ourselves bemoaning a Trump presidency. There are peoples whose privileges of prosperity and possibility are vastly inferior to ours. Having been so loved by God to receive the gospel, we are debtors to them (Romans 1:14). Do not think of the molehill of moral and social disadvantages of a Trump presidency. Think of the Himalayan mountain range of blessings we have in Christ. Let this put fire in our bones for what matters most: the salvation of the world.

Folks who want to “get past” the animosity, and “put it all behind us” and now “unite” around this unqualified man are mainly tired of the fight…they want to get back to a “business as usual/status quo” mode…BUT The Apostle Paul under the anointing of The Holy Spirit, WHILE IN PRISON AWAITING EXECUTION, said “fight the good fight, keep the faith, finish the course”…NOT stop and change horses in mid stream…or just quit.