#Sessions met w/ Kislyak for the 2nd time on Sept. 8. I did a LexisNexis search to see what was going on at that time. Here we go… 1/

At the G20 summit, Obama & Putin discussed sanctions that US imposed on Sept 1, which Putin said were inconsistent w/future cooperation. 3/

On Sept 7, Dir. of National Intelligence James Clapper publicly suggested for the first time that Russia was behind the DNC hack. 4/

Then, on Sept. 8 – the day of the #Sessions/Kislyak meeting – Trump told a Russian TV network he didn’t think Russia was behind the hack. 5/

The same day (9/8) that #Sessions met w/Kislyak, Trump suggested it would be “wonderful” if we had a relationship with Russia… 6/

Also on the same day (9/8) that #Sessions met w/Kislyak, both Trump AND Pence heaped praise on Putin & his leadership style. 7/

And (here it is), on the same day that #Sessions met w/Kislyak, Russia suddenly became optimistic about building good relations w/the US, 8/

So at the start of the wk, Russia wasn’t optimistic abt cooperation. After #Sessions-Kislyak mtg, that changed, 9/

At the G20 summit, Obama & Putin discussed sanctions that US imposed on Sept 1, which Putin said were inconsistent w/future cooperation. 3/

And then, 5 days after #Sessions-Kislyak meeting, guess what happened? Hacked DNC emails were released. 10/

And then, 5 days after #Sessions-Kislyak meeting, guess what happened? Hacked DNC emails were released. 10/

#Sessions JUST SAID he didn’t know anything was going on w/Russia/hacking when he met w/Kislyak. Umm really?

On Sept 7, Dir. of National Intelligence James Clapper publicly suggested for the first time that Russia was behind the DNC hack. 4/

Remember how I wrote earlier that the hacked DNC emails were dumped 5 days after #Sessions met w/Kislyak..? *Ahem*

HERE IS THE TIME-LINE OF SESSIONS INVOLVEMENT WITH THE RUSSIANS SANS THE COMMENTARY:

THIS NEXT REPORT INCLUDES VIDEO OF TRUMP ADMITTING A RELATIONSHIP WITH PUTIN PRIOR TO BEING ELECTED.

@realDonaldTrump @washingtonpost while this is bad for Don, the potentiality/ existence of NSA overreach @Snowden warned us of is troubling

@Joshua_Mikel @realDonaldTrump take him at his words.. Trump is a traitor or puppet? Take your pick.

WATCH VIDEO HERE OF TRUMP ADMITTING WHAT HE IS NOW DENYING.

“No one talked to Russia except my Campaign Manager, National Security Advisor, Attorney General and like 11 other guys. NO ONE.” 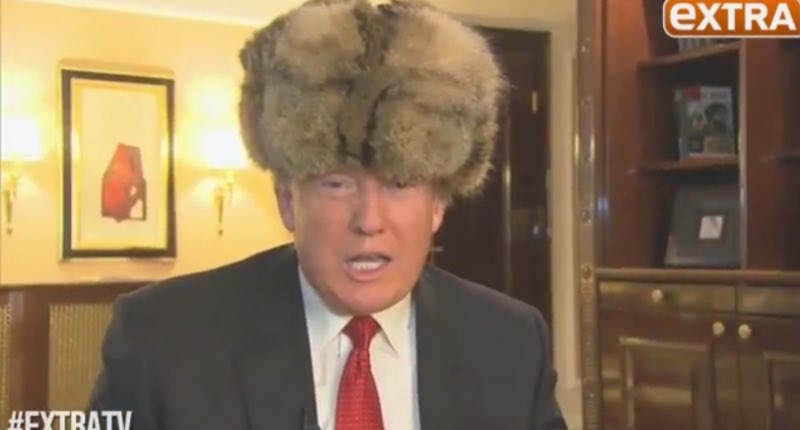 Evan Perez just said it on CNN, so I suppose I can here: Kislyak wasn’t just ambassador, he was Russia’s “top spy recruiter” in D.C.: SVR.

[NOTE: Earlier there was VIDEO documentation of Trump admitting a relationship with Putin PRIOR TO his election. Here we present evidence that the Russians ALSO ADMIT a relationship and close contact with Trump during the campaign and PRIOR TO the election.]

Two days after the presidential election, a Russian official speaking to a reporter in Moscow offered a surprising acknowledgment: The Kremlin had been in contact with Donald Trump’s campaign.

The claim, coming amid allegations that Russia had interfered with the election, was met with an immediate no-wiggle-room, blanket denial from Trump’s spokeswoman. “It never happened,” Hope Hicks told the Associated Press at the time. “There was no communication between the campaign and any foreign entity during the campaign.”

In fact, it is now clear it did happen.
The past few days have brought a growing list of confirmed communications between Trump campaign aides and Russian officials, with each new revelation adding to a cloud of suspicion that hangs over the White House as critics demand an independent investigation….

…It is unclear why the White House has consistently denied contacts with Russian officials if the meetings that took place were innocuous.

As a result, the confirmations of the encounters have trickled out through a series of news stories that have proved increasingly damaging to the Trump administration, with some Trump associates appearing to shift their accounts over time.
Already, Michael Flynn was forced to resign as national security adviser as a result of his post-election contacts with Kislyak…

…the recent revelations have made the post-
election comments from the Russian official newly relevant.

Those comments came from Deputy Foreign Minister Sergei Ryabkov, who told the Interfax news agency in November that “there were contacts” with Trump’s aides.

“Obviously,” Ryabkov said, “we know most of the people from his entourage.”

[NOTE: Admitted MULTIPLE contacts, knew each other quite well.] …Nearly all of the contacts that have emerged so far were with Kislyak, the affable Russian ambassador in Washington who is known as a consummate networker. [NOTE: AND Russia’s TOP SPY Recruiter.]

Kislyak appears to have worked to cultivate a relationship with the Trump campaign, starting his outreach even before Trump was thought likely to win the GOP nomination.

In April, Kislyak popped up at the Mayflower Hotel, where he was seated in the front row at one of Trump’s first major foreign policy addresses. During the speech, Trump offered a forceful promise that he would seek better relations with Russia.

“I believe an easing of tensions and improved relations with Russia — from a position of strength only — is possible, absolutely possible,” he said.

The event’s host, Dimitri K. Simes, president of the Center for the National Interest, a foreign policy think tank, said Kislyak was one of four ambassadors who attended as guests of his group. Simes said he introduced Trump and Kislyak in a receiving line at a reception before the event, which was also attended by Sessions and Kushner, among other Trump aides.

Simes, who is Russian American and favors warmer relations with Moscow, said it is common practice for foreign diplomats to try to get to know important advisers, like Sessions, to presidential candidates. “Let me put it more bluntly: They would be derelict in their duty if they didn’t try to get to know him,” Simes said.

Kislyak was also in attendance at the Republican National Convention, where he briefly met Sessions after a July 18 Heritage Foundation event attended by dozens of diplomats.

Page also confirmed his interaction with Kislyak at the event to MSNBC on Thursday. Last month, he told PBS that he had held “no meetings” with any Russian officials during the campaign. [NOTE: Page says he DID INTERACT with the Russians- but had “no meetings with ANY Russian official…one of these is a LIE.] …

…some GOP delegates were questioning the wording of the party platform and whether the Trump campaign had intervened to make it more Russia friendly. A delegate’s proposal regarding U.S. support for Ukraine in its fight against Russia-backed rebels had been softened before inclusion in the document.

Then-campaign manager Paul Manafort, who previously was a paid adviser to a pro-Russian Ukrainian president, told NBC in August that the change “absolutely did not come from the campaign.”

But this week, Gordon, the Trump campaign adviser, offered a different explanation. He said he had advocated for the change, believing it to match Trump’s views. [NOTE: Gordon also had his own ties with Putin and Russia.] …

…Rather than condemning the possible intervention in the election by a foreign power, Trump “playfully” called on the Russians to hack Clinton’s private server and locate emails she had deleted. “Russia, if you’re listening, I hope you’re able to find the 30,000 emails that are missing,” he announced at a July 27 news conference.

Sessions met with Kislyak in his office on Capitol Hill on Sept. 8, as U.S. officials were growing more concerned about Russia’s role in the election… of all 26 members of the committee showed that Sessions was the only one to meet one-on-one with Kislyak in 2016. And a Polish diplomat who met with Sessions in late spring said he did so at Sessions’s request, at least in part because of Sessions’s role with Trump…

HERE ARE MORE SOURCES, AND HERE, HERE, and lastly, HERE.

The real, tangible evidence and the facts are a mounting mountain of proof that Trump and his cronies DID and DO have ties to Russia that are NOT America-friendly.

Believe what you want, but this is coming from all over, even from within Trump’s own camp, and even from Trump himself.

WE TRIED TO WARN YOU…STILL ARE…