[NOTE: Original of article from months ago, but no change or correction mentioned since then, and this IS from one of Trump’s key mouth-pieces.]

Rep. Chris Collins was the first member of Congress to endorse Donald Trump. Since then he’s become, rather obviously, quite important to the campaign, and is one of their key surrogates in the media. In an interview with the The Buffalo News yesterday, Trump critical ally, first endorser, and top media surrogate told the media outlet that Trump’s big sell items, the “big, beautiful wall” and his “kick them out” policy are just a big show.

“I have called it a virtual wall,” Collins told the paper. “Maybe we will be building a wall over some aspects of it; I don’t know.”

A virtual wall. That is not what the Donald promised. You know what else he didn’t promise? Fake deportations.

“I call it a rhetorical deportation of 12 million people,” Collins said.

He then gestured toward a door in his Capitol Hill office.

“They go out that door, they go in that room, they get their work papers, Social Security number, then they come in that door, and they’ve got legal work status but are not citizens of the United States,” Collins said. “So there was a virtual deportation as they left that door for processing and came in this door.”

Virtual wall? Rhetorical deportation? Dude. Actual laugh.
No big beautiful wall. No 12 million deportations. No self-funding. No refusing big billionaire donors. No more trashing of Goldman Sachs. No more opposition to raising the minimum wage. Heck he’s not even standing by his list of SCOTUS nominees from yesterday!

Collins, probably suddenly realizing what his mouth just told a reporter, quickly backtracked saying he doesn’t speak for the Orange and Terrible Majesty, but that’s a bunch of crap.

“I’m not speaking for Donald,” Collins said. Oh I beg to differ. “Those were my opinions.” Sure. And we know why they are your opinions. You’d have to be a total idiot to think that this isn’t based on his own first-hand knowledge of exactly how seriously Donald takes his own campaign pillow talk. Which means of course that Trump fans will definitely think that.

Of course he’s not going to stand by his wall or his deportations. That was never going to happen and he knew it. And Collins knows it. Everybody does. Except for the people who mistakenly trusted him and who he is continuing to betray.

Since then Trump has said that, indeed, there would be a wall, or a fence in certain areas, or where there were “mountains and vicious rivers” nothing, and will the U.S. taxpayer pay for it or Mexico?…Hmm, so, is it still just a virtual wall??  Read here: 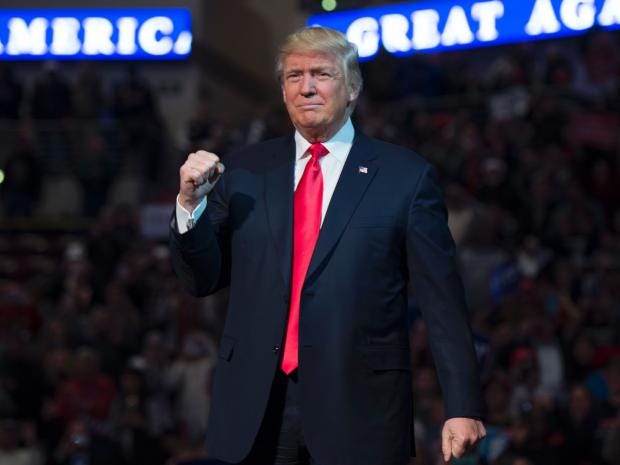 He did not clarify how he intended to force the Mexican government to repay the US.

It follows a string of similar reversals for the incoming leader. In October, he suggested for the first time that Mexico would reimburse the US for the cost of the wall, and in November, he admitted certain areas would likely be a “fence”.

In December, he claimed parts of the wall he pledged to build would not be needed due to “mountains” and “vicious rivers” in some areas…

But…weren’t we warned by Trump himself about his love of lying? Yeah, we were warned…