IF Everything you disagree with is “fake news”, regardless of the direct quotes, evidence, witnesses, and video that link it directly to the source, then it is NOT “fake news”, aka NOT a lie, but rather an irritating TRUTH. 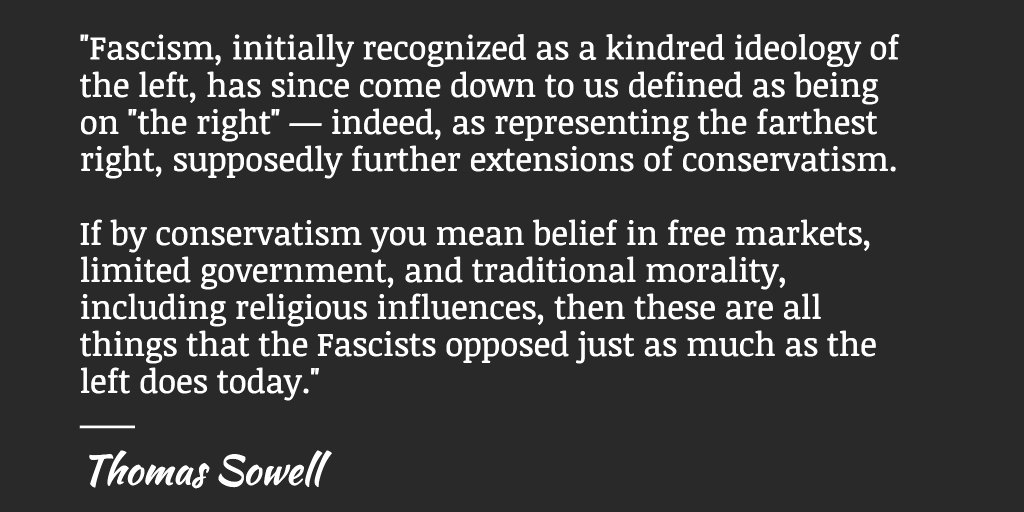 The abuse and proper use of a political label.

Those who put a high value on words may recoil at the title of Jonah Goldberg’s new book, Liberal Fascism. As a result, they may refuse to read it, which will be their loss — and a major loss. Those who value substance over words, however, will find in this book a wealth of challenging insights, backed up by thorough research and brilliant analysis.

This is the sort of book that challenges the fundamental assumptions of its time — and which, for that reason, is likely to be shunned rather than criticized. Because the word “fascist” is often thrown around loosely these days, as a general term of abuse, it is good that Liberal Fascism begins by discussing the real Fascism, introduced into Italy after the First World War by Benito Mussolini.

Unlike the Communists, the Fascists did not seek government ownership of the means of production. They just wanted the government to call the shots as to how businesses would be run.

They were for “industrial policy,” long before liberals coined that phrase in the United States. Indeed, the whole Fascist economic agenda bears a remarkable resemblance to what liberals would later advocate.

Moreover, during the 1920s “progressives” in the United States and Britain recognized the kinship of their ideas with those of Mussolini, who was widely lionized by the Left.

Famed British novelist and prominent Fabian socialist H. G. Wells called for “Liberal Fascism,” saying “the world is sick of parliamentary politics.” Another literary giant and Fabian socialist, George Bernard Shaw, also expressed his admiration for Mussolini — as well as for Hitler and Stalin, because they “did things,” instead of just talk. [NOTE: Sounds like they’re describing Donald Trump.].

In Germany, the Nazis followed in the wake of the Italian Fascists, adding racism in general and anti-Semitism in particular, neither of which was part of Fascism in Italy or in Franco’s Spain. Even the Nazi variant of Fascism found favor on the Left when it was only a movement seeking power in the 1920s.

W. E. B. DuBois, founder of the NAACP, was so taken with the Nazi movement that he put swastikas on the cover of a magazine he edited, despite complaints from Jewish readers. Even after Hitler achieved dictatorial power in Germany in 1933, DuBois declared that the Nazi dictatorship was “absolutely necessary in order to get the state in order.” As late as 1937 he said in a speech in Harlem that “there is today, in some respects, more democracy in Germany than there has been in years past.”

In short, during the 1920s and the early 1930s, Fascism was not only looked on favorably by the Left but recognized as having kindred ideas, agendas, and assumptions. Only after Hitler and Mussolini disgraced themselves, mainly by their brutal military aggressions in the 1930s, did the Left distance itself from these international pariahs.

Fascism, initially recognized as a kindred ideology of the Left, has since come down to us defined as being on “the Right” — indeed, as representing the farthest Right, supposedly further extensions of conservatism. If by conservatism you mean belief in free markets, limited government, and traditional morality, including religious influences, then these are all things that the Fascists opposed just as much as the Left does today.

The Left may say that they are not racists or anti-Semites, like Hitler, but neither was Mussolini or Franco. Hitler, incidentally, got some of his racist ideology from the writings of American “progressives” in the eugenics movement, [Margret Sanger, founder of Planned Parenthood, for one.].

– Thomas Sowell is a senior fellow at the Hoover Institution.

Now, having laid the groundwork via our prelude, let us look a little closer to Donald Trump and his political movement.

The term Lügenpresse, ‘lying press’, has been used intermittently since the 19th century in political polemics in Germany, most notably when the Nazis began using it to vilify the German press that was critical of Hitler and the Nazis…

…In 1933, Hitler’s propaganda minister, Joseph Goebbels, was assigned the task of producing Nazi controlled media that was conducive to their agenda and to further undermine the press. This propaganda was a crucial instrument for acquiring and maintaining power, and for the implementation of Nazi policies. During the first weeks of 1933, the Nazi Party seized control of printing machines in Germany. The regime deployed the radio, press, and newsreels to stoke fears of a pending “Communist uprising,” then channeled populist anxiety into political measures that expunged civil liberties and democracy.

The term has been reintroduced in recent years by various alternative political groups. Most recently, the alt-right in America. At Donald Trump rallies, his supporters taunted the media, calling them “lügenpresse.” And, Donald Trump echoes their sentiments and fuels their disdain daily with claims of “fake news.” Watch here:

FAKE NEWS media, which makes up stories and “sources,” is far more effective than the discredited Democrats – but they are fading fast!

Why is this significant in today’s political discussion? If you understand the logic behind the term, there is no question as to its implications. The sole purpose of it is to discredit the media to gain control of the political narrative. And, history has proven this logic to be an invitation to tyranny.

It is no secret that the media is untrustworthy. Dating back to Biblical times, information has been biased, inaccurate, misleading or just plain wrong…The way to solve this problem is a topic for another day, but it starts with raising the bar for moral standards and electing moral leaders.

Every report, every investigation, all research that does not look favorably upon Donald Trump he and his cronies call “fake news”.

Even if the report has direct quotes (in context), multiple witnesses, expert testimony, facts galore and video to fully substantiate what is reported… IF Little, Lying, Liberal Donnie El Trampo doesn’t like it??? Well, just slop the (BOGUS) label “fake news” on it and then we can “safely” reject and dismiss out of hand said report.

Better to lose to a true enemy whose policies you can fight and repudiate, rather than to a false friend whose schemes will drag you down with him.

As was applied to Trump back during the campaign:

…I think Hillary Clinton is one of the worst human beings in American politics. She has few principles that I can discern, other than her firm conviction that she deserves the Oval Office for enabling and then defending her sexually neurotic husband. She lies as easily as the rest of us breathe. She has compromised national security through sheer laziness at best, and corrupt intent at worst. If elected, she will enrich Wall Street and raid the public coffers while preaching hateful doctrines of identity politics to distract America’s poor and working classes.
But Trump will be worse. Morally unmoored, emotionally unstable, a crony capitalist of the worst kind, Trump will be every bit as liberal as Hillary—perhaps more so, given his statements over the years. He is by reflex and instinct a New York Democrat whose formal party affiliation is negotiable, as is everything about him. He has little commitment to anything but himself and his “deals,” none of which will work in favor of conservatives or their priorities.
Trump’s voters are willing to “shake up the status quo”—whatever that means—by putting an ignoramus at the head of a party and a movement he’s actually trying to destroy…

…In pulling down the GOP, Trump will take conservatism with it, and enshrine 30 or 40 more years of liberal dominance, beginning with his own liberal administration.

ALL of this was said and done MONTHS AGO…to no avail.

BUT…that does NOT make something you don’t like,  or disagree with “fake news”.