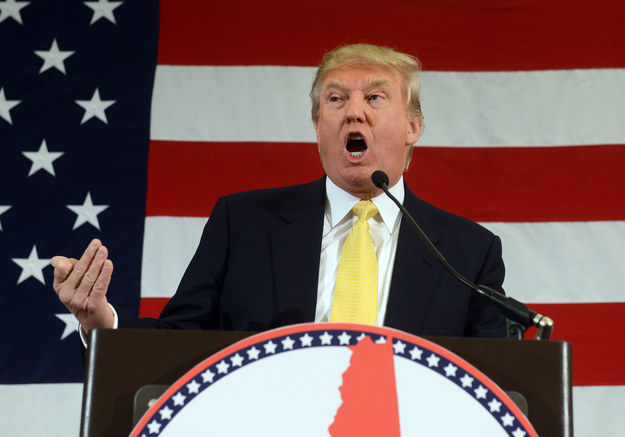 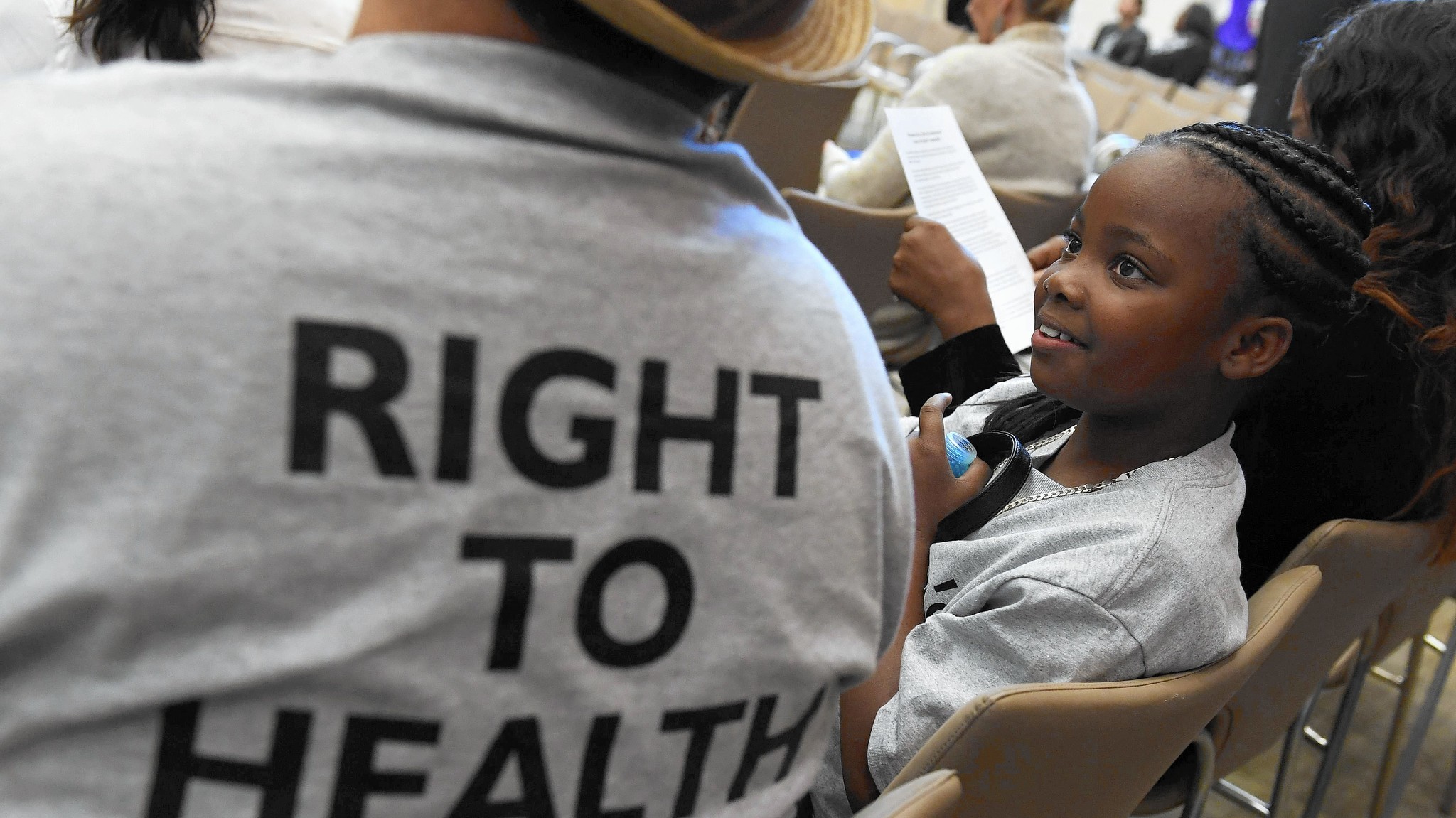 QUICK: Someone Tell me WHERE in The Constitution does it codify health-care as a “Right”??

I was stunned not so much by what Republican President-elect Donald Trump just said about health care as by when he said it.

For virtually his entire presidential campaign, Trump spewed airy, grandiose promises about his plans for replacing Obamacare (the Affordable Care Act) with something cheaper and yet more robust; a new program that preserved the many popular elements of the ACA and eliminated the unpopular elements.

But that was politicking, in which inflated rhetoric and vaguely worded flimflam are part of the seduction.

It worked. He won.

And now, by rights, he should be on to governing. Just days before his inauguration Friday, he should be lowering expectations, scaling back his promises and preparing his supporters for the unhappy compromises, delays and disappointments that lie ahead, not feeding them more fantasies.

Lower-income Americans, about 12.5 million of whom obtained coverage under Obamacare’s insurance exchanges, “can expect to have great health care,” Trump said. “It will be in a much simplified form. Much less expensive and much better. … They’ll be beautifully covered.”

“It’s not going to be their plan,” Trump said, referring to the existing, highly controversial, complex and admittedly flawed Democratic program passed in 2010 along party lines. “It’ll be another plan. But … I don’t want single-payer.”

Really? Because “insurance for everybody” that offers “great health care” “in a much simplified … much less expensive” form sounds an awful lot like single-payer — also known as Medicare for all, nationalized health care or universal coverage.

Trump was once all for it. “We must take care of our own,” he wrote in his 2000 book “The America We Deserve.” “We must have universal health care. Just imagine the improved quality of life for our society as a whole. … With more than 40 million Americans living day to day in fear that an illness or injury will wipe out their savings or drag them into bankruptcy, how can we truly engage in the ‘pursuit of happiness’ as our founders intended?

“The Canadian-style, single-payer system in which all payments for medical care are made to a single agency (as opposed to the large number of HMOs and insurance companies with their diverse rules, claim forms and deductibles) … helps Canadians live longer and healthier than Americans.”

And, Trump’s rote repudiation of single-payer in The Washington Post interview notwithstanding, it sounds like he’s still for it.

THEN THERE IS THIS-

During a rally in Manchester, New Hampshire, on Monday, Donald Trump touted his healthcare plan. The Washington Examiner called the speech “a mixture of socialism and incoherence.”
Here are five times Trump’s rhetoric about healthcare sounded more socialist than free-market:

In September, during an interview on CBS’ “60 Minutes,” Trump was asked by Scott Pelley about healthcare:

TRUMP: “Everybody’s got to be covered. This is an un-Republican thing for me to say because a lot of times they say, ‘No, no, the lower 25 percent that can’t afford private. But—’”

TRUMP: “I am going to take care of everybody. I don’t care if it costs me votes or not. Everybody’s going to be taken care of much better than they’re taken care of now.”

PELLEY: “The uninsured person is going to be taken care of. How? How?”

TRUMP: “They’re going to be taken care of. I would make a deal with existing hospitals to take care of people. And, you know what, if this is probably—”

During the first Republican debate on August 6, 2015, moderator Bret Baier and Donald Trump had the following exchange:

BAIER: “Now, 15 years ago, you called yourself a liberal on health care. You were for a single-payer system, a Canadian-style system. Why were you for that then and why aren’t you for it now?”

TRUMP: “As far as single payer, it works in Canada. It works incredibly well in Scotland. It could have worked in a different age, which is the age you’re talking about here. What I’d like to see is a private system without the artificial lines around every state…Get rid of the artificial lines and you will have yourself great plans. And then we have to take care of the people that can’t take care of themselves. And I will do that through a different system.”

Trump never elaborated on how a Canadian-style system would have worked in the “different age” of 15 years ago.

In 1999, when Donald Trump was considering a run for president, he told Larry King:

“If you can’t take care of your sick in the country, forget it, it’s all over… I believe in universal healthcare.”

“Liberal on healthcare, we have to take care of people… I love universal.”

And he told The Advocate in February 2000:

“I would put forth a comprehensive health care program and fund it with an increase in corporate taxes.”

In 2000, Trump wrote a book called The America We Deserve, in which he praised universal healthcare systems:

“We must have universal healthcare…I’m a conservative on most issues but a liberal on this one. We should not hear so many stories of families ruined by healthcare expenses…

Doctors might be paid less than they are now, as is the case in Canada, but they would be able to treat more patients because of the reduction in their paperwork..

The Canadian plan also helps Canadians live longer and healthier than Americans. There are fewer medical lawsuits, less loss of labor to sickness, and lower costs to companies paying for the medical care of their employees. If the program were in place in Massachusetts in 1999 it would have reduced administrative costs by $2.5 million. We need, as a nation, to reexamine the single-payer plan, as many individual states are doing.”

Appearing on The Late Show in January 2015, Trump told a story about his friend who visited Scotland:

“A friend of mine was in Scotland recently. He got very, very sick. They took him by ambulance and he was there for four days. He was really in trouble, and they released him and he said, ‘Where do I pay?’ And they said, ‘There’s no charge.’ Not only that, he said it was like great doctors, great care. I mean we could have a great system in this country.”

As the above examples show, Donald Trump has been an advocate of socialized medicine for decades.

AND THEN THERE ARE THIS:

Health Insurance “For Everybody” And The “Government Will Pay” Says “Republican” Donald Trump. AGAIN. 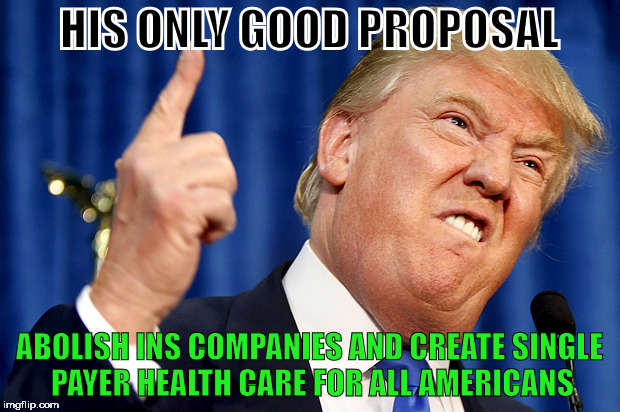 YEAH, Marxism, it IS that stupid.